from £4,981 per person 17 2
Prices & Availability
Including optional travel insurance or a price reduction of £75 if not required
Add to wishlist

Be mesmerised by a magical evening of ballet in an ornate St Petersburg theatre.

Join Spirit of Adventure on her inaugural cruise and celebrate this momentous occasion with a series of exciting on-board events and visits to some of the Baltic’s most magical ports. Beginning in Copenhagen, whose fairy-tale heritage includes the famous statue of the Little Mermaid, you’ll also have the chance to see Viking longboats on a trip to Roskilde.

Uncover more fascinating sculpture in Klaipeda, before an overnight stay in the opulent city of St Petersburg gives you the opportunity to explore the Hermitage and Fabergé Museums and attend a breathtaking performance of ballet. The UNESCO World Heritage Sites of Tallinn and Visby provide even more photo opportunities, and you can choose how to explore Stockholm – on land or by sea!

Aalborg is the grand finale to this once-in-a-lifetime cruise and it won’t let you down with its plethora of colourful street art – just beware the giant ship-eating fish!

save up to 30%
Book today and and save upto 30% of full fare. How our discounts work

Once home to Hans Christian Andersen, you may like to seek out Copenhagen's fairy-tale heritage – and the statue of the Little Mermaid is a good place to start. Or you could travel to Denmark's former capital, Roskilde, and explore its fascinating Viking Ship Museum where you’ll see original Viking longboats and have the chance to don some traditional Viking clothing.

Lithuania's third largest city was built in the Middle Ages by the Teutonic Order, a German crusading military force. Once known as Memel, and part of the Prussian kingdom for centuries, it has had a turbulent history with repeated invasions from Sweden, Russia and Germany. It's the gateway to the brackish Curonian Lagoon, which is protected from the Baltic by a ribbon of shifting sand dunes – the 60-mile Curonian Spit – now a UNESCO World Heritage Site. Much of the city was destroyed by fire in the 19th century and the dominant rebuilding style was art nouveau. Klaipeda is packed with sculpture: look out for the city's famous statue of Ann from Tharau and perhaps whisper in the ear of the Magical Mouse, a diminutive bronze sculpture reputed to convert good wishes into reality!

No Baltic cruise would be complete without a visit to the beautiful city of St Petersburg with its stunning mix of neoclassical, French and baroque architecture. Explore the wide boulevards, trace the network of canals and perhaps visit the Fabergé Museum to see the famous imperial eggs or head to the Hermitage Museum for an exclusive evening viewing. As you have an overnight stay you can take the opportunity to go ashore in the evening to see a ballet performance in one of the city’s great theatres.

Famed for its fairy-tale spires, this magical UNESCO World Heritage Site is one of the most beautifully-preserved medieval centres in Europe. Perhaps enjoy a fascinating look back at life in Tallinn during Soviet times on board an authentic Soviet-era bus. On this historical entertainment tour, you’ll experience Tallinn as a foreign tourist would have during the Soviet-era – expect passport control, suspicious interviewing and propaganda, as well as a Soviet-style picnic, and comedic tales of the Soviet era.

The capital of Åland, Mariehamn is often referred to as 'the town of the thousand Linden trees', because of the tree-lined avenue that runs through the town. Named by Tsar Alexander II of Russia, this relatively young town was born into the Russian Empire. Discover more about the Island's historic role in merchant shipping with a visit to the Aland Maritime Museum.

Set across several islands and interlinked by bridges, Stockholm is a city unlike any other. The Old Town, Gamla Stan, has one of the best-preserved medieval town squares in Europe, where pedestrian-friendly cobblestone streets are easily explored on foot. Alternatively, you could take to the water to see the 14 islands that make up this unusual city from a different perspective.

Formerly a Viking trading post, Visby is one of the most important towns of the Hanseatic League and a UNESCO World Heritage Site. Situated on the island of Gotland, it's approximately 50 miles from the Swedish mainland and has an entirely different feel. Take a stroll around the town on a guided walk, or perhaps discover a ‘Viking Village’ at Tofta.

The attractive waterside city of Aalborg is a shoppers’ paradise, with more than 300 shops in the heart of the city. But there’s more to Aalborg than meets the eye. It has a thriving art and culture scene and is home to an impressive collection of colourful street art.

Enjoy fascinating talks from Martin Sixsmith
Writer, presenter and journalist Martin Sixsmith will talk about his life and career in Soviet and post-Soviet eastern Europe.

A little bit about Martin

Martin Sixsmith studied at Oxford, Harvard and the Sorbonne. From 1980 to 1997 he was the BBC’s correspondent in Moscow, Washington, Brussels, Geneva and Warsaw. From 1997 to 2002 Martin worked for the British government as Director of Communications and Press Secretary to several cabinet ministers.

He is now a writer, presenter and journalist, and acted as adviser on the televised political sitcom, ‘The Thick of It’ and the film, ‘In The Loop’. In 2013, Martin’s book, ‘The Lost Child of Philomena Lee’, was adapted for film and became the multiple Oscar-nominated Philomena, starring Steve Coogan and Judi Dench. His book, ‘Ayesha’s Gift’, a true life murder mystery set in Pakistan, was published in 2017; and his novel, ‘An Unquiet Heart’, a love story set in the turbulent years of the Russian Revolution, was published in 2019. 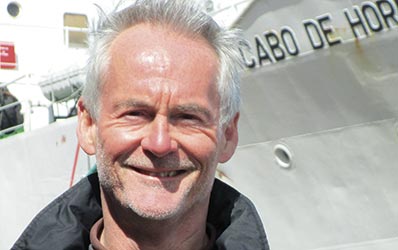 Get an insight into Radio 1 from Johnny Beerling
Fellow of the Radio Academy, Johnny will host a quiz and give on-board talks.

A little bit about Johnny

Johnny started his career running a radio station in Aden. Then in 1967, following the closure of pirate radio stations, he joined the BBC to set up Radio 1, which provided a legal alternative. Johnny was at the forefront of this process, recruiting most of the DJ talent and devising the jingles, subsequently producing the first ever show with Tony Blackburn. He became an Executive in 1972 and in 1973 he conceived and launched the show for which he is best known, the Radio 1 Roadshow. In 1985 he was appointed Controller of the Radio 1 Network, responsible for the entire output including major projects such as the sound for Live Aid. Johnny has won various awards, including Fellow of the Radio Academy, the highest award in the industry. In 2017 his book, ‘Inside Radio 1’ was published to celebrate Radio 1’s 50th Anniversary. 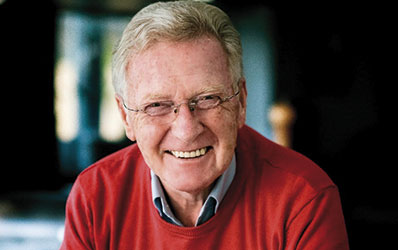 A little bit about Johnnie

Johnnie Walker began broadcasting in 1966 on pirate ships: Radio England and Radio Caroline. When these stations became illegal in 1967, Johnnie was one of two DJs who continued to broadcast, thus making him both a radio legend and a potential criminal. After the demise of Radio Caroline, and once the ‘taint of criminality’ had passed, Johnnie joined Radio 1 where he championed artistes such as Lou Reed, Elton John and The Eagles. After seven years, Johnnie left Radio 1 to pursue his career in the USA. Then in 1999, back in the UK, he joined Radio 2 taking over the Drive Time show. Still on Radio 2, today he presents Sounds of The 70’s on Sunday afternoons and The Rock Show on Saturday nights. 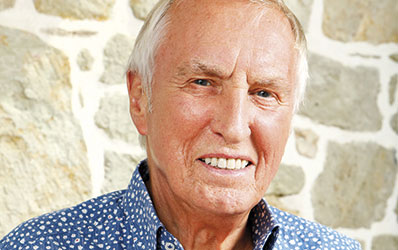 A little bit about The Ayoub Sisters

Since making their Royal Albert Hall debut in 2016, Scottish – Egyptian sisters Sarah and Laura Ayoub have had a meteoric start to their career.
Discovered by Mark Ronson and now signed to Decca Records in partnership with Classic FM; the multi-instrumentalist sisters recorded their debut album with the Royal Philharmonic Orchestra in the world-renowned Abbey Road Studios. Their album debuted at No.1 in the Official Classical Artist Albums Chart.

The multi-award winning sisters made their live television debut, performing their own arrangement of George Michael's 'Mother's Pride' at the BAFTAs. In 2018, the sisters made their BBC Proms debut performing live on BBC 1 at Proms in the Park, Glasgow. Classic Brit and Global Award nominees, Infinitime Music, Young Scot Award and WYF winners, The Ayoub Sisters are fast becoming the sound and faces of a new generation of classical and crossover artists. 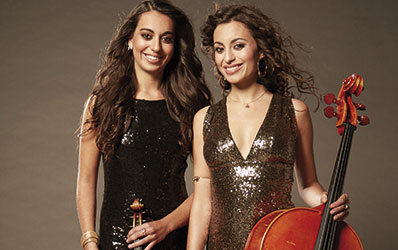 A little bit about the boys

Step back in time to the Golden Age of Rock ‘n’ Roll as the sounds of the 50s and 60s are recreated by The Vintage Boys. With immaculate 3-part harmony, slick choreography, sharp suits and the backing of a live band, the boys perfectly capture the look and sound of the golden era and will have you singing along and dancing in the aisles with their high-energy performance. Featuring over 40 hits from stars of the 50s and 60s including Chuck Berry, Buddy Holly, The Beatles, Elvis Presley, and many more! Between them the boys have performed in theatres and concert halls worldwide, including at Her Majesty’s Theatre and The Royal Albert Hall, as well as performing in Jersey Boys and We Will Rock You. 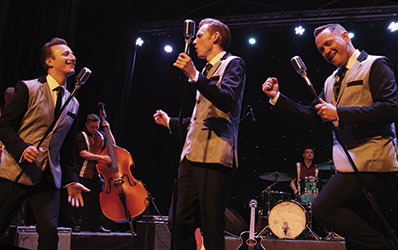 A little bit about Michael

Michael Portillo is a British broadcaster who has made over twenty series for the BBC of “Railway Journeys” which has taken him throughout Europe, North America, India, Southeast Asia and Australia, exploring history and cultures. He previously spent the best part of thirty years in politics, serving as a minister in the government of Margaret Thatcher and in the cabinet of John Major. On leaving politics for sixteen years he was a permanent fixture as a pundit on the BBC’s late night satirical look at politics called “This Week”. More rail journeys and a series on the British Empire are in preparation. 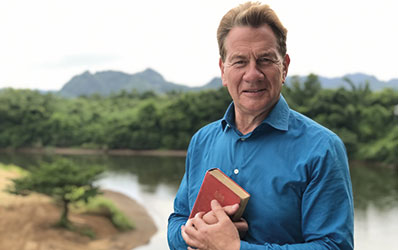 Russian artists have had a huge influence on this elegant form of dance throughout history. St Petersburg is home to several world-renowned schools of ballet where Anna Pavlova, Rudolf Nureyev and Uliana Lopatkina all studied. So where better to experience this enchanting dance form for yourself than at one of the city’s stunning theatres? This will definitely be a night to remember!

Stockholm by land or sea

Stockholm’s Old Town, Gamla Stan, boasts one of the best-preserved medieval town squares in Europe, where pedestrian-friendly cobblestone streets are lined with museums, shops and cafes. Explore the Old Town on foot or, to discover the 14 islands that make up this unusual city, you could take to the water for a different perspective of Sweden’s capital.

Aalborg has a thriving art and culture scene thanks to a recent multimillion pound makeover that has enabled the regeneration of the city’s waterfront. So why not hire a bike, get a local map from the tourist information office and seek out the colourful street art and vast murals that have sprung up around the city?

All excursions mentioned are optional, at an additional cost, and are subject to availability and change. Some of the highlights detailed may only be seen on optional excursions or by exploring independently.

from £4,981 per person 17 2
Prices & Availability
Including optional travel insurance or a price reduction of £75 if not required
Add to wishlist

from £4,981 per person 17 2
Prices & Availability
Including optional travel insurance or a price reduction of £75 if not required
product
Cruise
Saga Cruises
no
holidays
UK
en
web