From Rembrandt to Rubens

from £1,949 per person
2 passengers 9 nights
Prices & Availability
Including optional travel insurance or a price reduction of £54 if not required
Add to wishlist

Take a voyage of artistic discovery aboard Spirit of the Rhine

Be among the first passengers to step aboard Saga’s brand new luxury ship, Spirit of the Rhine, for a nine-night river cruise focused on the artistic highlights of the low countries.

You will be joined by expert host Raj Bisram, one of the UK’s leading auctioneers and dealers, and during your cruise enjoy included visits to the world-famous Rijksmuseum and Van Gogh museum in Amsterdam during a two-night stay in the Dutch capital before cruising on to Utrecht and Rotterdam – from where you visit The Hague to see more of the country's Golden Age treasures. Spend a night in Dordrecht before sailing to Antwerp, a city synonymous with Rubens, as you’ll discover during another overnight mooring. A night in the Belgian capital, home to the Royal Museum of Fine Arts, provides a fitting finale to your holiday.

*Return flights or direct Eurostar train to Amsterdam for a supplement.

Spirit of the Rhine

Travel to Amsterdam and embark Spirit of the Rhine. Enjoy a welcome reception and dinner on board.

You will remain moored in the city for the next two nights.

Set off for a day of discovery in iconic Amsterdam with your Museum Card in hand.

Perhaps head straight for the completely renovated Rijksmuseum, an iconic 135-year-old institution which displays more than 8,000 works of art – just a tiny portion of its one-million-strong collection – and is particularly renowned for its paintings from the 17th-century – the Dutch Golden Age. You’ll find the Dutch Masters section on the top floor, where you can study master painter Vermeer’s famous Milkmaid, and see works by Pieter de Hooch and Jacob van Ruisdael. The works of painter and etcher Rembrandt van Rijn dominated the Dutch Golden Age, and the museum’s pièce de résistance is his huge painting housed here,The Night Watch.

Later, perhaps visit the Van Gogh Museum, which houses some 200 of his paintings alongside works by Gauguin, Monet and Seurat. Of special note are Van Gogh’s Sunflowers and The Potato Eaters, while the delicate Almond Blossom was painted shortly before his death as a gift to his brother and sister-in-law to celebrate the birth of their son, who later went on to found the museum.

Enjoy the morning at leisure in Amsterdam, perhaps using your Museum Card to discover more priceless works of art.

Bid the capital farewell this afternoon as your cruise begins, spending the afternoon sailing towards Utrecht.

Look forward to spending a full day in the Kroller-Muller Museum, set in the beautiful Hoge Veluwe National Park, which boasts scenic heaths, sand dunes and woodland. The museum itself is home to a large collection of Van Gogh pieces while the surrounding grounds also contain the largest sculpture park in Europe.

Cruise to Rotterdam this morning and after an early lunch, take the short drive to The Hague for a visit to two superb museums – the Mauritshuis and Gemeentemuseum.

Built originally in the 17th century as the home for the count of Johan Maurits van Nassau-Siegen, the Mauritshuis is a fine example of Dutch classicism which became a museum in 1822. Within the restored and extended interior you can study some of the finest masterpieces from the Dutch Golden Era, including Vermeer’s Girl with a Pearl Earring. Other works of art housed here include genre paintings by Jan Steen, Rembrandt’s 1669 Self-Portrait and example’s of Frans Hals’ ‘rough technique’ which can be seen in such gems as his Laughing Boy. Afterwards head to the beautiful art deco confines of the Gemeentemuseum, which is home to the world’s largest Mondrian collection as well as famous works by other artists including Pablo Picasso.

This morning cruise away from Rotterdam and moor in the village of Kinderdijk, from where you can join an optional excursion to view its 19 UNESCO-listed windmills up-close.

Continue to arrive in Dordrecht at lunchtime and spend the afternoon visiting The Dordrechts Museum, one of the oldest in the country, having been established in 1842, with a rich collection spanning six centuries of Dutch art. Moor overnight in Dordrecht.

Cruise through the morning before spending the afternoon exploring Antwerp, Belgium's second largest city, which has many treasures to explore.

The city was a great centre for the arts in the Renaissance period with Flemish painter Peter Paul Rubens and and Van Dyck both living and working here. Antwerp's Royal Museum of Fine Arts is partly dedicated to Rubens’ work and you can look forward to an included visit to that, as well as the Rubens House Museum.

No trip to Antwerp would be complete without a visit to the medieval Cathedral of Our Lady - the largest Gothic cathedral in the country with the highest church tower in Benelux at 403 feet. You'll be able to see Rubens’ altarpieces including Elevation to the Cross, Descent from the Cross and Resurrection of Christ.

Cruise on to the capital this afternoon.

Entrance is included to the Royal Museums of Fine Arts – a group of art museums which contain more than 20,000 drawings, sculptures, and paintings, dating from the early 15th century to the present day.

Disembark Spirit of the Rhine after breakfast for your return trip to the UK.

The little village of Kinderdijk lies on the north bank of the river Noord between Rotterdam and Dordrecht. The name arose from the legend of a child holding back the water threatening to flood the land in 1421. The 19 windmills, built between 1722 and 1761, form the largest park of windmills still in use in the Netherlands. During this excursion you’ll see how a windmill works, learn why they were used and how they have been replaced by more modern pump stations. You’ll visit the former steam pump station Wisboom, as well as the historic waterboard house, and walk along the flood wall.

Before your cruise stay two nights at a locally rated 4-star Westcord Fashion Hotel with breakfasts included. The hotel is located within walking distance of the Vondelpark and has great links to be able to explore the capital at your leisure. Available only when you fly or travel by Eurostar.

You will be joined by expert host Raj Bisram, one of the UK’s leading auctioneers and dealers, who you might have seen on Sarah Beeny’s Four Rooms on Channel 4 or as an antiques expert on BBC’s Antiques Road Trip, Celebrity Antiques Road Trip, Flog It! and Bargain Hunt. 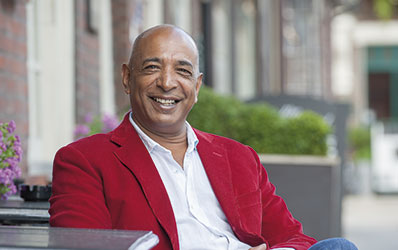 Some of the highlights may only be seen on optional excursions at an additional cost, or by exploring independently.

Your Saga host will issue you with a Museum Card on your first evening in Amsterdam which is valid for five visits in Holland.  This will give you access to the Rijsmuseum, Van Gogh Museum, Kroller-Muller museum, Mauritshuis and Gemeentemuseum.  Other museum entrances will be arranged separately by your host. You may wish to visit a different museum using your card whilst in Holland, but please note it only gives access to a total of five visits. While entrances are included, you will have to pay extra to use an audio guide or purchase a guidebook, and you won't be entitled to fast-track entry. It does not give entry to any special exhibitions within the museums either.

From Rembrandt to Rubens

from £1,949 per person
2 passengers
9 nights
Prices & Availability
Including optional travel insurance or a price reduction of £54 if not required
Add to wishlist
From Rembrandt to Rubens